By Office for the Advancement of Research in Uncategorized on August 22, 2016.

Our latest blog entry comes from Dan Stageman, Director of Research Operations in the Office for the Advancement of Research at John Jay College. 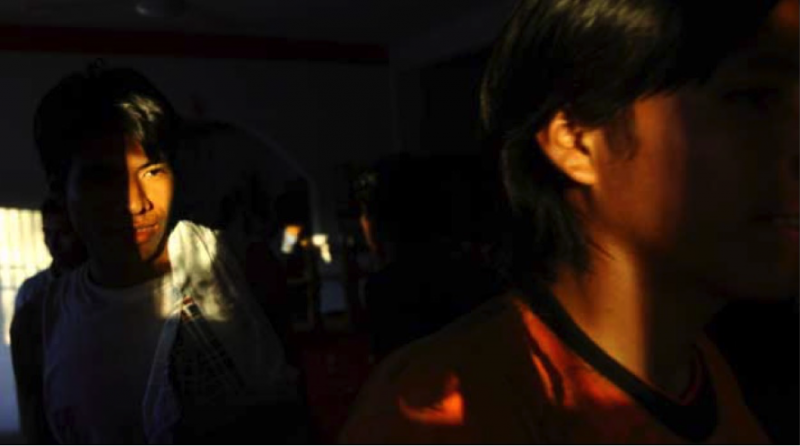 Late last week the criminal justice blogosphere was abuzz with attempts to process the latest bit of good news dropped into the national conversation around mass incarceration. On August 18th, the United States Department of Justice announced its intention to end the federal Bureau of Prison’s fourteen contracts with private/for-profit prison providers, citing as cause its own August 2016 investigation into the safety and security of these contract facilities. The report was, to put it mildly, damning:

We found that in a majority of the categories we examined, contract prisons incurred more safety and security incidents per capita than comparable BOP institutions. […] For example, the contract prisons confiscated eight times as many contraband cell phones […] had higher rates of assaults, both by inmates on other inmates and by inmates on staff […] serious or systemic deficiencies such as failure to initiate discipline in over 50 percent of incidents […] were improperly housing new inmates in Special Housing Units [i.e. solitary confinement][etc.] (p. ii)

While I of course ‘cherry-picked’ this litany of deficiencies from the DOJ report’s executive summary, they represent a fairly neutered echo of the similar findings that advocacy organizations – from the ACLU, to Human Rights Watch,Detention Watch Network to The Sentencing Project – have presented to the public and the federal government for ten-plus years to little effect.

It is a meaningful victory, for these organizations and the very real people whose interests they represent, that someone in the federal government finally decided to listen to their recommendations – and more importantly, to act on them decisively. It is a victory that will result in a measurable improvement in quality of life for thousands of prisoners and their families. It should not, however, be mistaken for a solution to the problem of for-profit/private prisons. To be fair, most of the media coverage of the DOJ announcement that I have reviewed has been appropriately circumspect. The Guardian’s Jon Swaine and his co-authors, for example, note that the BOP’s for-profit contract facilities “almost exclusively incarcerate low-risk inmates convicted of immigration offenses […] around 22,000 people at an annual cost of $600m.” This is about ten percent of the BOP’s total inmate population.

According to the Bureau of Justice Statistics report linked above, it is also about 17% of the total population of US prisoners held in private/for-profit facilities – a proportion that might help to explain the precipitous drops in stock value experienced by the two largest publicly traded US private prison operators on the day of the DOJ’s announcement. The Corrections Corporation of America (CCA) lost 52% of its share value; GEO Group lost 45%. The third largest operator, Management and Training Corporation (MTC), is privately held, so we can only speculate that it lost a similar proportion of its market value. All three companies are unsurprisingly putting on a brave public face in the wake of the announcement: CCA touts its “keen observ[ation] of the BOP’s declining inmate population over the last three years”, implying the decision is less important than the market has made it out to be; GEO Group focuses its terse statement on its “efforts to provide industry-leading offender rehabilitation programs and reentry services”; MTC takes direct issue with the findings of the DOJ report, trumpeting in the title of its response that “Contract Prisons Provide Great Value to Corrections.”

Do these for-profit prison corporations indeed have reason to remain optimistic about an apparently shrinking market? Both CCA’s and GEO Group’s stock prices rebounded significantly on Friday from their precipitous Thursday lows, while remaining well below their previous averages. The answer, however, may lie less in watching the reactions of the market than in the clues we can glean from two less widely-reported recent news stories. The first is a two-week old investigation from the Guardian’s Renee Feltz on (and watch out here for flying acronyms) the US Immigration and Customs Enforcement (ICE) successor program to Secure Communities (SComm), the Priority Enforcement Program (PEP). The second is from the Guardian’s chief reporter Ed Pilkington: an exposé of detention conditions in border facilities operated by ICE’s sister-agency, Customs and Border Protection (CBP).

A lot of folks have a working knowledge – accompanied by an appropriate degree of moral outrage – of what private/for-profit prisons are, what mass incarceration is, what is generally wrong with the criminal justice system. A lot fewer folks, in my experience, have a parallel knowledge of the immigrant detention system: the shortlist of people who I can talk to about Secure Communities without supplying a detailed explanation seems to be limited primarily to other academic researchers and advocates in the field. Most people register surprise when I tell them that a quarter of CCA’s 2015 revenue in 2015 came from immigrant detention – specifically, from Immigration and Customs Enforcement – or that GEO Group’s revenue breakdowns are similar. Immigrant detention remains, for a variety of reasons, a uniquely profitable segment of the private corrections industry. The DOJ’s recent announcement will do nothing to reduce that.

What should have reduced the profitability of immigrant detention was the transition from the SComm to PEP. SComm has been described by Stanford researcher Juan M. Pedroza as a “water mill that collects removable aliens in successive buckets […] without pause across levels of priority” (Pedroza 2013, p.62) – an apt description of how the program operated for the most part indiscriminately. Secure Communities, in place from 2008 through its discontinuation in 2014, used the FBI’s National Crime Information Center (NCIC) system to allow ICE to surveil (at its peak) every arrest by a local law enforcement agency nationwide to determine whether the arrestee had any known immigration violations on her record. Any such violation, whether criminal or not – i.e. visa overstays, prior unauthorized entry, exclusions, etc. – would result in ICE issuing a ‘detainer’ to the arresting agency. A detainer is a request that the arresting agency hold the arrestee until ICE can take her into custody – whether the arrest results in criminal charges or not.

SComm came under criticism because of the frequency with which it led to the eventual deportation of individuals with no criminal records or very minor ones (such as status offenses like loitering, or traffic offenses like broken taillights) – some 178 thousand, or nearly half, of the 375 thousand deportations attributed to the program throughout seven years of its existence. PEP was intended to solve this very problem, ostensibly restricting detainer requests to arrestees who had been “convicted of an offense listed under the DHS civil immigration priorities, […] intentionally participated in an organized criminal gang to further the illegal activity of the gang, or poses a danger to national security”.

Except, according to Feltz’s review of data from Syracuse University’s Transactional Records Access Clearinghouse(TRAC), it hasn’t turned out that way. Instead, “half of the so-called ‘holds’ were placed on people who had been arrested but actually had no criminal conviction.” In fact, the TRAC report indicates that some two-thirds of the detainer requests issued by ICE under the Priority Enforcement Program were for individuals with no criminal conviction or the lowest level of offense – a proportion exceeding the approximately 50% with similar offenses (or lack thereof) detained under Secure Communities. TRAC goes on to break down the detainers by crime type; after ‘No Criminal Conviction’, offenses like ‘Traffic Offense’ (5,310 detainers in 2014), ‘Public Order Crimes’ (1,425), ‘Disorderly Conduct’ (1,223) and ‘Drug Possession’ (2,004) feature prominently. Major crimes like ‘Homicide’ (603) and ‘Sex Assault’ (1,272) together represent about 1% of the total.

Numbers like these, in the context of an ostensibly reformed immigration enforcement program, illustrate the tenacity of ICE’s institutional orientation towards maximizing deportation – as well as the difficulty of calling the deportation regime to heel, after ten-plus years of increasing local control. It is the problem that John Jay political scientist and geographer Monica Varsanyi and her co-authors address in their recent book, Policing Immigrants: Local Law Enforcement on the Front Lines (U. Chicago Press, 2016):

Being found in the country without authorization is not currently a crime, but it is increasingly regarded as such because of the merging of law-enforcement responsibilities with immigration enforcement. […] The federal government has avoided critically examining how local law-enforcement agencies identify and process the suspected unauthorized immigrants they turn over to federal immigration authorities. (p.5-6)

The thousands of unauthorized immigrants detained under PEP are, like those detained under its predecessor SComm, originally arrested by local law enforcement agencies, under local policy and for local reasons. ICE, along with its sister agency Customs and Border Patrol (CBP), have in effect become bureaucratic middle-men between local law enforcement and private/for-profit prison corporations: facilitating apprehension over which they have minimal influence, and funding detention over which they exercise minimal oversight.

It is the latter issue that Ed Pilkington’s exposé of the CBP’s Tucson holding facility brings into sharp focus. 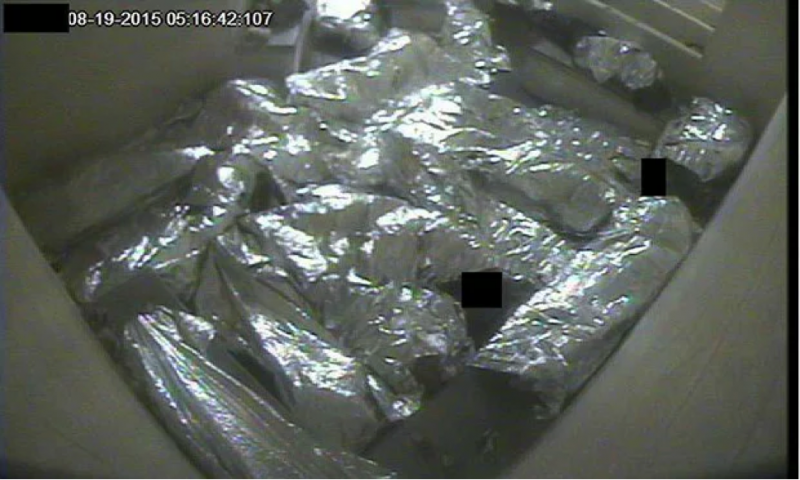 The several deeply disturbing image show immigrant detainees packed “like sardines in a tin” under emergency blankets in a filthy holding cell. Another shows another changing a baby’s diaper amid a pile of trash on a concrete floor. 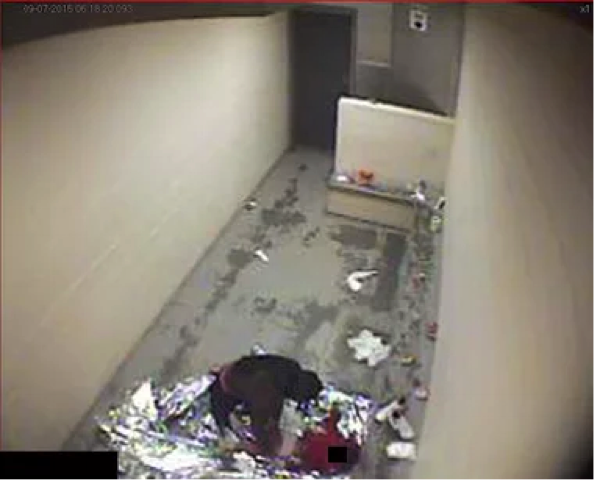 It isn’t clear whether these facilities are privately owned or operated; CBP is more opaque than ICE in this regard, and in any case, detainees are unlikely to spend more than a few days in CBP holding facilities before being deported – in contrast to ICE facilities, where immigrants can spend years before their eventual deportation. What is clear, however, is that these immigrants have been snared by an institutional culture that regards them as less than human – treating them (if the above photos are any indication) as commodities to be processed. It may be that there is no profit to be made via CBP’s short-term detention of immigrants in holding cells, but there is certainly profit to be made in returning them to the southern side of the border: Security Firm G4S contracts with CBP to remove the immigrants on what it dubs (in its promotional literature) “The Bus No One Wants to Catch”. The Marshall Project’s recent exposé (by Eli Hager and Alysia Santo) on the private prisoner transport industry demonstrates pretty decisively how this moniker is earned.

Unauthorized immigrants, regardless of the symbolic importance of the DOJ’s decision on private prisons, will remain at the center of this deadly triangle: at one end an anti-immigrant local politics of enforcement; at another the dehumanizing institutional culture of two massive federal bureaucracies; and at the third, a constantly adapting market, twisting the human bodies of detainees into corporate profit. Well-meaning federal decrees cannot substitute for deep and abiding organizational reform, or binding legislative policy; indeed, it is entirely possible they could be reversed at the stroke of a pen, depending on the results November 8th. Advocates and researchers cannot afford to take a victory lap while for-profit prison corporations adapt, and immigrant detainees suffer.

Share on FacebookShare on Twitter
← You know that the behavior is harmful. Why can’t you stop? Dominance Status Affects the Transmission of Fear →