The Coming Storm: Meeting the Challenge of a New Deportation Regime

Our latest blog entry comes from Dan Stageman, Director of Research Operations for the Office for the Advancement of Research at John Jay College. 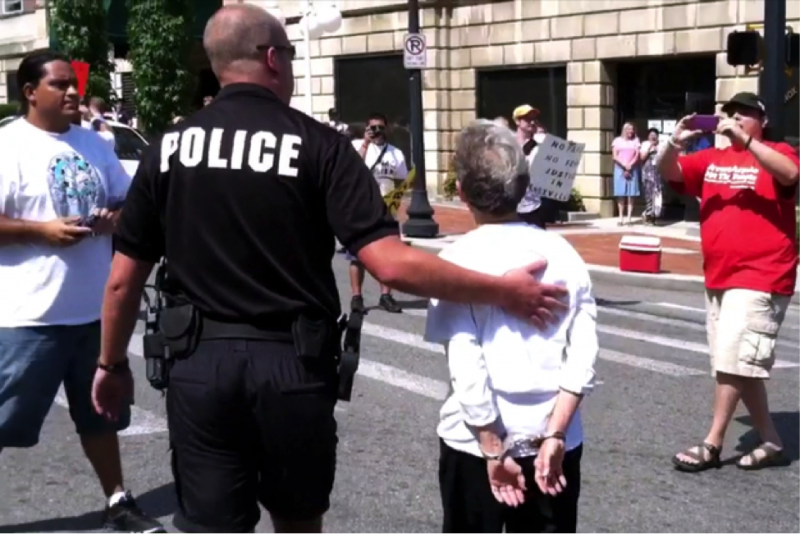 On the morning of Wednesday November 9th, I shook off the cobwebs of a thoroughly sleepless night to drive my partner and children to John Jay College and successfully defend my dissertation with them looking on. I had even prepared for the proud moment by reprinting my business cards in anticipation of my success; what I hadn’t prepared for was to present the accumulated insights of seven years’ work on the deportation of American immigrants the day after the most shocking presidential election result of my lifetime.

I had no illusion that the study of deportation could ever be a dry academic exercise; nothing that so profoundly affects the lives of so many Americans ever could be. I was, however, expecting to approach my work as scholarship first and foremost: a well-earned break until the New Year, followed by redoubled efforts to submit parts of my dissertation for publication in academic journals, and revise others into a book with a reputable university press.

These plans are now on hold. The implications of my work for immigrant communities across the US insist upon a different approach, and a more immediate kind of discussion. Most importantly, I believe that many of the predictions and expectations I have read since the election have the wrong idea about the incoming administration’s approach to fulfilling the President-Elect’s recent pronouncements on deportation. Specifically, in widely reported comments during his interview for the November 13 edition of 60 Minutes, the President-Elect had the following to say about his administration’s immediate deportation plans:

Leaving aside the reality that there aren’t two million undocumented immigrants with criminal records for Trump to deport, National Immigration Forum Executive Director Ali Noorani notes in an interview with USA Today that the President-Elect “would need congressional approval to hire more […] Immigration and Customs Enforcement agents” – an expansion of federal bureaucracy that might be a hard sell to a congress that has vowed to slash government spending – but “doesn’t need any new money to change the focus of the immigration agents who are already in place.”

While it is heartening to see immigration advocates like Mr. Noorani treating the President-Elect’s campaign rhetoric about a national ‘deportation force’ with rational circumspection, his continued focus on ICE enforcement activity misses an important consideration: the necessary tools are already in place to effect a massive ramp up of deportations by relying on local law enforcement agencies to take the lead on apprehension – and potentially contribute to the resulting need for increased detention capacity as well. Not only are these tools already in place, but so is a pre-existing incentive structure to encourage local law enforcement agencies to put them to use.

My research focuses on these pre-existing federal-local immigration enforcement partnerships, and the incentive structures that give local governments, and the people who run them, self-interested justifications to apprehend and detain undocumented immigrants in their communities and set them on the road to deportation. I found that, of the approximately 1.5 million deportations carried out during the Obama administration’s first term (2009-12), at least a third (500 thousand) began with a local law enforcement agency apprehension. Two programs – the 287g program,and Secure Communities – made this level of local law enforcement participation possible.

What are the incentives for local governments to participate in these programs? There are many.  County Sheriffs enter into these agreements for political gain, pursuing nativist votes by tapping into anti-immigrant sentiment. New Jersey’s current Lieutenant Governor Kim Guadagno launched her political career by running for Monmouth County Sheriff – a campaign that she won on a promise (later fulfilled) to enter the county into a 287g agreement if elected. Others, like former Hall County (Georgia) Sheriff Steve Cronic, combined political motivations with financial ones: a contract with the Corrections Corporation of America provided the ostensible economic benefits of siting the North Georgia Detention Center within the heart of the county, while a 287g agreement provided the means to fill its beds with immigrant detainees.

These federal-local partnership enforcement programs are not going away, and the incentives for local governments to enter into them will only become stronger under the Trump administration.Calls like that of National Day Laborer Organizing Network Executive Director Pablo Alvarado for President Obama to use his remaining time in office to “sever the link between police and ICE that his administration created” are unlikely to have the intended effect of “innoculat[ing] against a domestic human rights crisis[.]” While it is true that the Obama administration relied heavily on these programs to ramp up US deportations to their highest ever levels during his first term in office, the law that makes them possible dates to the Illegal Immigration Reform and Immigrant Responsibility Act (IIRIRA) passed by Congress in 1996.

I believe that it is this law and its possible interpretations that will allow the incoming administration a wide latitude to involve local law enforcement in the promised mass deportation effort. Section 287(g) begins with the following language:

[ICE] may enter into a written agreement with a State, or any political subdivision of a State, pursuant to which an officer or employee of the State or subdivision, who is determined by [ICE] to be qualified to perform a function of an immigration officer in relation to the investigation, apprehension, or detention of aliens in the United States (including the transportation of such aliens across State lines to detention centers), may carry out such function at the expense of the State or political subdivision and to the extent consistent with State and local law.

The parameters of such agreements, or the training that local law enforcement officers require under them, are left ambiguous. Notwithstanding the established practice of ICE under the Obama administration (or the GW Bush administration prior to that), it is certainly conceivable that a Trump administration could severely reduce the rigor of established training requirements, along with the strictures laid out in ICE’s current Memorandum of Agreement template, leaving a loose and undemanding structure to induce local law enforcement agencies to join. The new administration could further incentivize these agreements through the use of Intergovernmental Service Agreements(IGSAs) that reimburse local jails and related facilities for detaining immigrants – a situation that looks likely to lead to an explosion of new management contracts for the Correctional Corporation of America and its competitors in the private/for-profit prison industry.

I’ve found in my research that it’s possible to make empirical predictions about the places where the incentive for local governments to enter into immigration enforcement agreements is highest – and consequently, where the most vulnerable immigrant communities are located. The first places where we should expect to see local enforcement ramping up in support of the Trump administration’s deportation efforts are small-towns and rural areas where undocumented immigrants are visible, visibly working, and just beginning to put down roots. These are places where nativism commonly runs strong, fueled not only by anxieties about immigrant domination of local labor markets, but also by ill-founded concerns about non-laboring immigrant dependents ‘stealing’ taxpayer supported government services.

For the policy and advocacy organizations tasked with supporting immigrant communities, the challenges presented by local enforcement are manifold. Effective legal challenges will be hampered at many levels and in many areas by a judicial system that appears likely to tilt in favor of the incoming administration. Shaming or otherwise shedding an unfavorable light on participating jurisdictions will be ineffective where nativist voters represent an electoral majority. Under the circumstances, the most promising strategies are likely to be those that focus on the direct and practical organization of immigrant communities themselves. Education efforts that help immigrants to know their rights when faced with imminent enforcement actions are one example. Efforts that help immigrant communities avoid common patterns of local enforcement are another, recognizing that roadblocks and other forms of traffic enforcement are a common approach.

Finally, a focus on local enforcement allows advocates and allies to organize counter-efforts in jurisdictions where governments and law enforcement agencies value close working relationships with immigrant communities in their efforts to prevent and respond to crime. The movement by immigrant supporting jurisdictions to refuse ICE detainer requests based on the 4th Amendment interpretation laid out in Miranda-Olivares v. Clackamas County has only grown since that case was determined in 2014. While we should realistically expect this movement to come under sustained legal assault by the new administration, recent statements like that of LAPD Chief Charlie Beck that his department is “not going to work in conjunction with Homeland Security on deportation efforts” offer some reassurance that such efforts are antithetical to contemporary professionalism in police leadership.

Advocates should not, however, simply take law enforcement executives’ word for it. By most accounts, Charlie Beck is a dedicated law enforcement officer and a decent human being (see e.g. Joe Domanick’s recent history of LAPD reform Blue); nevertheless, his word remains that of a public figure on an issue of momentarily intense media scrutiny. As such, no individual or organization with a vested interest should operate under the assumption that it represents immutable LAPD policy. Advocacy organizations need to hold Beck and other law enforcement leaders to these non-cooperation pledges with every tool at their disposal. Verifying that they represent official departmental policy and are incorporated into department manuals and standard operating procedures is a good start, and, along with mandated formal training, the first step toward ensuring they are incorporated into departmental culture in meaningful, lasting ways.

For myself, I will continue writing and presenting on the Trump administration’s likely approach to fulfilling candidate Trump’s deportation campaign promises, and supporting efforts to organize immigrant communities to face the coming storm. I was lucky enough to arise last Wednesday morning with a clear mission laid out before me, a signal to cut through the noise of a thousand progressive policy goals being forcibly dismantled in the bleak years to come. Now is the time to decide what we believe in and focus our time and energy on protecting it. I believe that the United States must remain a nation of immigrants.