If you’re like us, you love podcasts enough that you’ve subscribed to more than you can listen to in a week of subway commutes. Podcasting, then called online radio, rose in popularity with the proliferation of mp3 players in the early 2000s. In tandem with other personal platforms like blogs, podcasts exemplified the “democratizing spirit” of the internet.

Today, they are big business. Since the release of Serial in 2014, podcasts have boomed. Monthly listeners have nearly doubled since 2014, from around 39 million Americans to an estimated 90 million. As the listening audience grows, quality improves, and bigger names get interested in the medium, advertisers are investing millions.

At John Jay, interest in podcasting has risen along with the medium’s growing potential. The college is home to a variety of podcasts, run by students, faculty and staff, on a rainbow of topics. For example, students in the English department work with Professor Christen Madrazo to write, produce, and edit Life Out Loud, which highlights the diverse voices and real stories of John Jay’s student body. We also have faculty working on podcasts hosted outside John Jay, podcasts run by research centers, and faculty and staff who produce their own shows, right here on campus.

We will introduce you to two homegrown John Jay podcasts that seek to translate scholarship into a form that everyone can understand. Meet Kathleen Collins, a Reference Librarian and Professor at John Jay College, and Nick Rodrigo, a CUNY Ph.D. candidate and John Jay College adjunct professor. While Kathleen is on her 38th episode of podcast Indoor Voices, and Nick has just released the first six episodes of They Are Just Deportees, both share the desire to take CUNY research out of the ivory tower and bring it to the community. 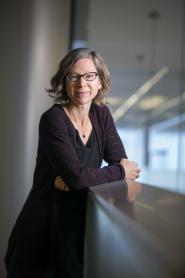 Kathleen Collins has been producing Indoor Voices since the summer of 2017. She started the podcast as “a way to highlight the fascinating things going on around CUNY that might not be widely known. There are so many inhabitants in the CUNYverse doing incredibly interesting things… We like being able to provide a low-stakes, easy-to-share platform for people to talk about their work.”

To Kathleen, the conversations are the key element. She and her co-host, La Guardia Community College librarian Steven Ovadia, interview CUNY faculty, students, alumni and staff members about their research or creative output; they have a great deal of leeway to highlight what interests them. 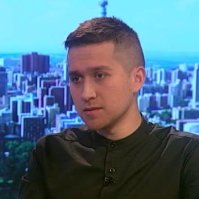 Nick Rodrigo is new to podcasting, overcoming challenges as he meets them in the course of creating They Are Just Deportees. The newly-launched show examines the various ways in which the U.S. immigration enforcement system shapes and controls the lives of migrant communities in this country. With co-host Darializa Avila Chevalier, TAJD helps listeners to understand “the multiple sites of border enforcement in the U.S., and the punitive effects of the country’s periodic moral panics on the ‘criminal alien.'”

Nick, and his associates in the Social Anatomy of a Deportation Regime Working Group (the sponsor of the podcast), think this is a particularly relevant topic. “Immigrant rights have come under increasing threat from the state, with bans on immigration from Muslim majority countries, the detention of children at the U.S./Mexico border, and the pledge of this administration to increase the forced removal of all undocumented people. … It is vitally important that the deportation system — which expels up to 300,000 persons a year — be placed in the historical context of this country’s treatment of the ‘other,’ while focusing on the real time implications of the current system on immigrant communities.”

For both showrunners, podcasting is a great way to make sometimes-complex issues and scholarship more accessible to an average listener. Says Nick, “two of the major issues in scholarship today are the ‘ivory tower’ mentality of academics and a lack of interdisciplinary focus on major social issues. Conferences and public lectures can be delivered in such inaccessible language that they can be alienating to non-academics. Podcasting allows for the complex issues concerning immigration enforcement to be distilled and presented to the public in a way that is accessible and digestible, with the opportunity for the listener to pause, reflect, and reengage at their own pace. Podcasting also provides a platform for criminologists, sociologists, public health experts, geographers, and journalists to come together on an issue and, if the interview structure is good, a compelling narrative for change can be constructed.”

Kathleen also wants to make it easier for non-experts to engage with what CUNY produces. “There is so much going on within CUNY,” she says, “and it shouldn’t be hidden inside the academy. Podcasts are a good way to get people interested in new things — it’s a mini, portable seminar for your ears. But since Steve and I act as generalists in our role as interviewers, we can hopefully elicit a layman’s interpretation of what scholars are thinking and writing about. The point is to bring attention to the author or artist, and ask about their research and writing process and teaching — these topics bring the conversation to a universal level.”

Creating content to fit the platform can sometimes be challenging. Nick was “forced to learn new skills on the job,” but found that his struggles with editing gradually turned into confidence! Kathleen cites the extensive support and inspiration from other podcasters and staff at the college as a source of her success and joy in creating Indoor Voices.

In the end, she says she loves every episode she produces — thanks to the satisfying conversations and intimate connections she can form with guests during a 40 minute interview, each new episode supplants the last as her new favorite.

Check out the latest episodes of Indoor Voices, They Are Just Deportees, and more John Jay podcasts: