A Critical History of Incarceration in New York City

March 25, 2020 / 2 Comments on A Critical History of Incarceration in New York City

Dr. Jayne Mooney is an Associate Professor of Sociology at John Jay and a member of the doctoral faculty of Women’s Studies and Sociology at the CUNY Graduate Center. She is also a director and founding member of the Critical Social History Project (CSHP), a research initiative and part of John Jay’s Social Change and Transgressive Studies Project that draws on archival material to shed light on the history of incarceration in New York City.

The project began in 2015 with a conversation spurred by reporting on abuse, poor conditions, and a rash of tragedies at Rikers Island; how best, Mooney and colleagues wondered, to preserve the memories of those who had been affected by the infamous jail, including not only the incarcerated but also their friends and families, guards and educators? And so they began the “Other City” project, which forms the largest component of the CSHP. Informed by their research into the history of New York’s penitentiary system, Mooney’s working group is pointing out the problems inherent in Mayor Bill de Blasio’s administration’s proposal to close Rikers and open four new city jails.

“On the most basic level, what we’re showing is that the current proposals are reinventing the wheel. It’s the same thing that’s always happened. Closing an institution and setting it up again, you’re going to have the same problems, because you’re not getting to those deep-rooted, structural issues,” says Mooney.

In a forthcoming article, “Rikers Island: The Failure of a ‘Model’ Penitentiary” due to be published in The Prison Journal in 2020, Mooney and her co-author, CUNY graduate student Jarrod Shanahan, go through the instructive failures of incarceration reform in New York City back to the 1735 construction of the Publick Workhouse and House of Correction. They argue that a lack of historical documentation has allowed policymakers to strategically “forget” the failures of past “model” or “state of the art” institutions, continually replacing old jails with new without a look at the larger issues that have led to waves of highly praised but ultimately unsuccessful penal reform.

Set against the backdrop of historical, social and political context, Rikers’ closure and the proposals to replace it look familiar. “All of these places opened in the spirit of optimism—everything was going to change. And then everything goes wrong, these institutions are denounced as embarrassments, and the decision is made to close them down and rebuild. Of course, that’s what’s been happening in the present moment,” Mooney says. She and her colleagues encourage the Mayor’s Office to look beyond the walls of the prison for new solutions to social problems faced by New York and, indeed, the United States.

(Read her December 2019 letter to The Guardian on the subject, “Rikers has failed like others before it, but the solution is not new jails.”) 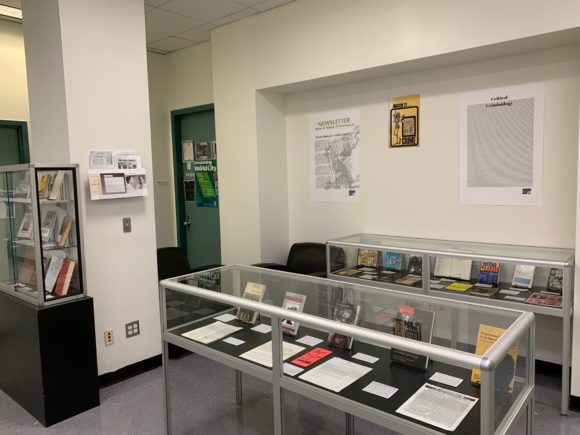 Mooney’s challenge to the new proposals is grounded not only in her work in political social history, but also in her background as a critical criminologist. “There’s a very strong abolitionist line all the way through critical criminology,” she notes, which informs the way the Critical Social History Project has approached critiques of the plan to build new jails.

The CSHP isn’t only focused on documenting mass incarceration in NYC. As the Vice Chair of the American Society of Criminology’s Critical Criminology and Social Justice Division, as well as the archivist, Mooney has been accumulating archival information related to the division and the field’s history of activism. The CSHP’s Preserving Justice component, jointly directed by Mooney and Visiting Scholar Albert de la Tierra, has created an exhibition in the Sociology Department displaying some of the core critical criminology texts. It’s open to any students, faculty or staff who are interested in the history of the field and the work of its important thinkers.

You can learn more by visiting the Critical and Social History Project’s website.