On April 16, 2019, John Jay College’s Franklin A. Thomas Professor in Policing Equity Dr. Phillip Atiba Goff spoke at Session 4 of TED2019 in Vancouver. The program featured eight speakers representing eight projects that are receiving funding from The Audacious Project in 2019. Dr. Goff spoke on behalf of his independent non-profit organization, the Center for Policing Equity (CPE), which was one of this year’s Audacious Projects.

CPE focuses on addressing racism in the United States. According to Dr. Goff, “When we change the definition of racism from attitudes to behaviors, we transform that problem from impossible to solvable.” CPE’s project, COMPSTAT for Justice, is a database leveraging data collected from police departments and cities on police behavior in an effort to identify problem areas where specific police behaviors can change.

With the support of The Audacious Project, CPE wants to extend the results it’s already seen with partners adopting COMPSTAT for Justice, by delivering the project to police departments serving 100 million people across the United States over the next five years.

To hear Dr. Goff’s TED Talk, visit the @TEDTalks Twitter page, where the link to the livestream is still up. You can read more about Session 4 of TED2019 on the TEDBlog.

Nathan Lents is sticking to the science

As an evolutionary biologist, and author of such books as Not So Different: Finding Human Nature in Animals and Human Errors: A Panorama of Our Glitches, From Pointless Bones to Broken Genes, Nathan H. Lents has joined the ranks of scientists whose work is under attack by proponents of intelligent design.

There is no coherent theory about intelligent design; according to Lents, the one commonality is that supporters “don’t buy modern evolutionary theory, or some part of modern evolutionary theory. They hold a whole variety of incompatible positions.” The views of intelligent design supporters range from believing the planet was created less than 10,000 years ago, to finding a role for God in gradual or ongoing acts of creation and evolution, to those who think God “set up” for life to evolve as it has in something Lents calls “the Perfect Pool Shot.”

Lents’s most recent book, Human Errors, came out in 2018 to great excitement from the science and reading communities. When it was published, he thought that intelligent design supporters “would just roll their eyes. I didn’t offer it as a serious critique [of intelligent design], so I didn’t think they would respond in a serious way but they absolutely did; they went on the attack.” Lents said it took him months to learn about the different types of creationists and how to respond to and refute their attacks effectively, promoting scientific thought without getting dragged into the mud. 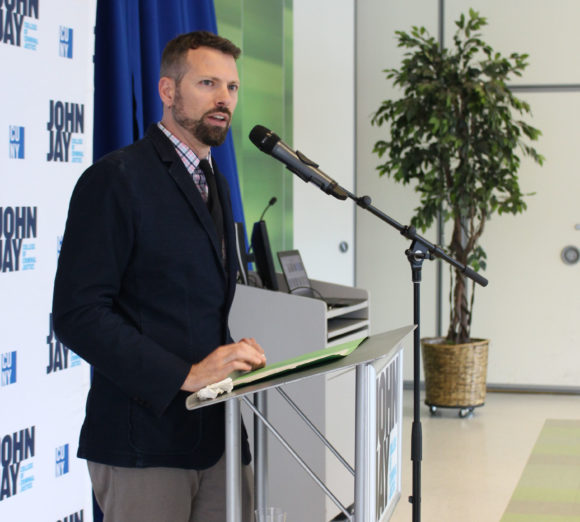 This month, Lents and two co-authors can be found standing up for modern evolutionary theory in Science, a journal that has been at the center of important scientific discovery and thought since its founding in 1880, reviewing Darwin Devolves, a new book by biochemist Michael Behe. He is among the best-known figures in the intelligent design movement; Lents characterizes Behe as a serious man who views his own work as serious science.

“Michael Behe believes in common descent, the true age of the earth, that all living things have evolved, he believes in all of that. But the only thing that he takes issue with is the source of all this diversity in life, that then gets acted on by natural selection. He thinks that God or a supernatural force of some kind has to provide this new influx of genetic information somehow, periodically, and then evolution can play out for a while. Either it was preloaded in the ‘perfect pool shot’ or there are ‘continuing miracles of life.'”

While creationism and trying to explain science with a creationist mindset have always been with us, in the late 1990s Behe introduced a concept called “irreducible complexity,” and this notion has really taken over those who are trying to marry science and creationism. Irreducible complexity is the idea that evolution must be false because natural selection acts by propagating mutations that create advantage for the organism; however, some structures are so complex that they never could have evolved, because their individual pieces must work together to convey advantage. Behe holds that evolution could not have produced all of the interrelated structures in a complex system like, for example, the eye, because the innumerable steps and parts it takes to make up the eye (and therefore to create vision) aren’t advantageous on their own, and therefore could not have evolved without the hand of an intelligent designer.

Lents doesn’t agree with that theory. “What we do know is that these structures don’t evolve as fully-formed units. When the eye was evolving, it wasn’t like a fully-formed retina — boom — just appeared, and then a full-formed lens, that’s not how it works. The whole thing becomes gradually more complex, and then, of course, many, many steps later it looks like if you remove any one part the whole thing doesn’t work, but that’s because it’s evolving as a unit, not stepwise. It’s not like building a car. The good thing is that, if you look at the eye, we can find intermediates, not in the fossil record but in living things right now, that have an earlier version of the eye.”

In this review, Lents sticks to the science. They point to sections or examples in Darwin Devolves that fail to take into account evidence produced by testing modern evolutionary theory. Although Lents and both of his co-authors have been subject to attacks on their work by supporters of creationism, he says he’s learned his lesson about responding to attacks that are ultimately unserious or political in nature.

“I’ve come to realize, Lents says, “that in these exchanges, my real audience is not the intelligent design community. I’m writing for millions of silent readers who come into this debate innocently and earnestly when they see their children start to learn about evolution in middle school and they want to see what’s out there, they want to read for themselves. So that’s who I’m writing for, the people who are just genuinely trying to find answers about what the science really says, what evidence do we really have, that kind of stuff. So I’m not really speaking to the intelligent design community anymore, I’m just speaking to the general public, trying to correct the record on science.”

In fact, that really sums up Lents’s approach to writing more generally. He wrote his second book for the general public, “first of all to entertain, but also to help them understand how these little quirks that we have in our bodies have come to be, and how to live with them, and survive and thrive.” It’s very important to Lents to advance the idea of a scientific mindset, which he says intelligent design proponents don’t have.

“Science, at its best, comes at the evidence and tries to come up with an explanation that best fits that evidence. And even when that explanation starts to become what we call accepted science, it is still tested. But intelligent design supporters, including Michael Behe, their starting point is that they have a truth that they already believe is true, and then they try to mold an explanation for the science around that preconceived notion. So it’s backwards. And that’s why they end up with egg on their face so often, because they’ll come up with an explanation that fits the limited data that we have at one point in time, and then we just get more data and a fuller understanding and they have to keep revising their explanation. And that’s just not a good way to come up with the truth.”

Lents plans to continue writing fact-based science texts with the general public in mind, even if he does invite further criticisms from the intelligent design community or other conservative elements. He says he’s currently laying the foundation for his next book, “which is about human sexuality in the evolutionary context. If you see a pattern in my work, it’s that I’m getting more and more controversial with each book.” Lents wants to look at human sexuality as it’s connected to the greater natural world, and the ways that social constructs have shaped our expressions of sexuality. His argument? “A label-free approach to sexuality is much more in line with our natural biology. The only thing labels do is create restrictions.”

Dr. Nathan H. Lents is a Professor of Biology at John Jay College, as well as the Director of John Jay’s Honors College. Apart from being the author of the two books mentioned above, Dr. Lents blogs at The Human Evolution Blog and on Psychology Today. For more, read his bio.

To read his review with co-authors Joshua Swamidass and Richard Lenski in Science, visit the website.

Behe’s assertion that ‘purposeful design’ comes from an influx of new genetic information cannot be tested through science. By contrast, modern evolutionary theory provides a coherent set of processes–mutation, recombination, drift, and selection–that can be observed in the laboratory and modeled mathematically and are consistent with the fossil record and comparative genomics. (from Science)