John Jay Scholars on the News: What Makes for Smarter Gun Policy?

By Office for the Advancement of Research in John Jay Scholars on the News on April 18, 2018.

John Jay Scholars on the News looks at tough issues through the lens of the research our scholars are producing, and informs the way we think about important debates and the role of public scholarship and evaluation. This post was originally published on March 19, 2018.

Following the mass shooting that killed 17 and injured even more at Marjory Stoneman Douglas High School in Parkland, Florida – just the latest high-profile incidence of gun violence in the United States – the conversation in Washington has focused heavily on gun policy. Thanks in large measure to the efforts and activism of MSDHS students since the attack, the issue has remained at the top of the national agenda. On March 14, students from schools around the country walked out of classes to protest widespread gun violence, and protests have taken to the Capitol and state houses to ask for change.

We spoke to scholars and practitioners at John Jay College to ask for their thoughts about what feels like a significant moment in the public discourse on gun policy, and asked how best to move forward.

How does this moment in the national conversation about gun control feel different? Why do you think the response to the Parkland shooting has been so different from previous events? Do you believe the Never Again movement has the potential to make real change?

Christopher Herrmann (Assistant Professor, Law and Police Science): There is certainly a different ‘feel’ about the gun control debate after the Parkland shooting.

Sung-suk Violet Yu (Associate Professor, Criminal Justice): The Never Again organizers are very active. The movement has gained traction, I think, because it is high school students leading it. They are not too helpless (like the young children at Sandy Hook), but also are not jaded, and they have few opponents. They are soon-to-be voters and a soon-to-be major consumer group, whose political views and spending habits are flexible and can be changed, making them a force to be reckoned with. They challenge mindsets and business-as-usual attitudes of politicians and big companies alike.
The organizers are also passionate, and savvy about social networks, and their message resonates with many because the organizers experienced the carnage of school shootings firsthand, and we have all witnessed such tragedies too many times.

Doug Evans (Senior Investigator, Research and Evaluation Center): Emotional appeals hit hard when they come from people who have lived through a difficult experience, and even harder when they come from kids. The high school survivors are motivated and have a platform to address the masses, and people are listening because they can relate, either because they are in high school or are a teenager, or because they have kids of their own. I think the Never Again movement will make real change, but it will be gradual. As more and more young people become involved and realize the collective influence they can have over elections, elected officials will have no choice but to adjust their campaigns to appeal to a younger voting demographic.

Christopher Herrmann: The Never Again movement has already managed to keep an ongoing dialogue on current gun politics and organized nationwide student walkouts, and soon there will be the National March for Our Lives on March 24th in Washington, DC. The question remains if these tactics will contribute to measurable change in the future. So far I think the biggest accomplishment the movement can take credit for is the recent gun bill passed into law in Florida (Senate Bill 7026, also known as the Marjory Stoneman Douglas High School Public Safety Act). While it didn’t accomplish all the gun control measures that were requested, the fact that students and supporters were able to make substantial legislative changes to Florida’s gun laws within three weeks in one of the most pro-gun state legislatures is momentous and noteworthy.

What issues are we losing sight of or glossing over when we talk about mass shootings? How do we take a broader view of gun violence when mass shootings in schools are dominating the news cycle?

Doug Evans: This cannot be stated enough: the NRA has an annual budget of a quarter billion dollars, and often uses an extreme argument (the government wants to take your guns and, ultimately, your rights) in response to reasonable arguments (restricting who can own guns and automatic firearms to prevent mass shootings). Coming to a consensus about the purpose of weapons that can fire ten or more rounds per second and deciding who, if anyone, should have access to these weapons that are capable of causing mass casualties, requires us to take a broader view. 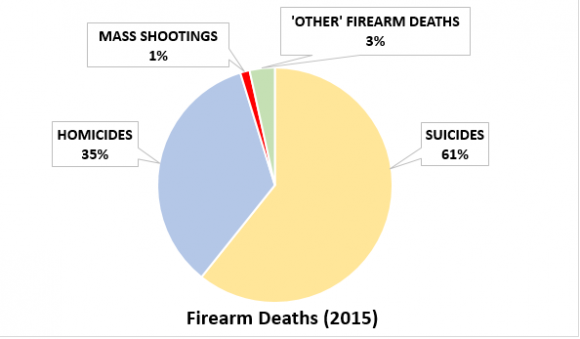 While the media may focus on mass shootings (especially school shootings), our gun politics debate needs to take into account the much larger context of suicide and homicide firearm deaths.

David Kennedy (Director, National Network for Safe Communities): When these mass shootings in schools occur, the public is rightfully outraged, but they are rarely as outraged by the gun violence that regularly causes trauma, fear, and grief in other communities. This is a problem, but also an opportunity to draw wider attention to the routine violence taking place in many marginalized communities. People should know that while we wait for broad solutions for preventing mass shootings, we already have immediate ways for states and cities to address this more frequent violence.

What gun restrictions or legislation, short of a ban, would be the most effective in reducing gun violence?

Violet Yu: It is not that we not know how to have sensible gun control. The simple sad fact is that there is a lack of political, ideological and economic willpower to make this happen. It is startling how easy it is to be a gun owner. At least in the U.S., if you can afford a smartphone, you can afford a semi-automatic rifle. Once purchased, there are minimal to no ongoing maintenance expenses. This affordability allows a large number of people to own multiple firearms, and practice shooting or hunting as hobbies.
It is not a new idea to suggest registering all firearms with an agency, similar to drivers’ licenses. What about mandatory gun owner’s insurance, as expensive as motor vehicle insurance or even a mobile phone subscription? That ongoing expense would remind gun owners that they must take good care of their firearms and not let them fall into the hands of non-legal owners. It is not clear whether a measure placing an artificial economic burden on gun ownership will pass, but we have done this before by levying taxes (i.e., alcohol) or giving tax credits or subsidies as needed. Would it be crazy to add a tax on firearms? I think not.

Christopher Herrmann: I along with the overwhelming majority of Americans (including an overwhelming majority of gun-owning Americans) support a universal background check system that requires all firearm sales to go through a licensed firearms dealer, including private party and gun show transactions. I also support improving the current FBI National Instant Criminal Background Check System, to incorporate any military violations and mental health screenings into the current system, and bans on assault-style weapons and bump stocks. I support a waiting period on prospective gun buyers between three and five days. And I do not advocate arming school employees.

Doug Evans: Although policymakers would like the public to think that legislation is responsible for falling rates of gun violence [in New York City], I think that is an oversimplification. It may be responsible for a small percentage of the reduction, but large cities across the country are in the midst of historic decreases in crime and violence. More prominent than legislation are economic and sociological factors.
Nevertheless, there do need to be restrictions on people with mental illness, both for the protection of the public and would-be gun owners.

What states do you believe provide the best model for potential new national legislation?

Doug Evans: Specific gun laws vary widely not only from state to state but also within states. New York City has experienced decreasing gun crimes and the lowest number of murders in decades, as I noted earlier, but the city’s gun laws are stricter than most jurisdictions would consider implementing. It is extremely difficult to get a gun permit and even more difficult to get a license to carry a gun. Open carry of guns is not allowed anywhere in New York. The considerable paperwork, fees, background checks and additional steps New York has put in place for gaining legal access to guns are far more onerous than most states.

Christopher Herrmann: The governors of New York, New Jersey, Connecticut and Rhode Island recently signed an MOU that will create a multi-state regional task force on gun violence. The objective of the task force is to (1) trace and intercept illegal guns; (2) improve data-sharing, analysis, and response efforts; and (3) establish a multidisciplinary gun violence research consortium containing researchers from criminal justice, public health, public safety, public policy, and social welfare. President Mason, David Kennedy and I were recently included on a conference call and invited to participate.
The federal government, however, has been unable to dedicate a significant research focus on gun violence and has been largely ineffective in developing policy that improves upon any of our current gun violence problems.

(Answers have been lightly edited for clarity.)

Doug Evans is an adjunct assistant professor at John Jay College, and a Senior Investigator/Project Director at the college’s Research and Evaluation Center. He is currently engaged in an assessment of a system-wide effort in New York City to expedite and enhance arrests, prosecutions and sentencing in felony firearm cases.

Christopher Herrmann is an assistant professor in John Jay College’s Law and Police Science Department. He specializes in crime analysis and crime mapping, and has worked with the NYPD on crime prevention and control strategies. Currently he is working on violence prevention initiatives with the New York City Housing Authority research team at John Jay, concentrating on gun violence in New York City.

David Kennedy is a professor of criminal justice at John Jay College, and the director of the National Network for Safe Communities. His work with the NNSC supports cities implementing strategic interventions to reduce violence, minimize arrest and incarceration, enhance police legitimacy, and strengthen relationships between law enforcement and communities.

Sung-suk Violet Yu is an associate professor in the Criminal Justice Department at John Jay College. Formerly of the Vera Institute of Justice, she focuses on crime prevention, corrections, and impacts of environments on spatial patterns of crime using statistical methods. Her upcoming article in the Journal of Interpersonal Violence is “Illegal Firearm Availability and Violence: Neighborhood Level Analysis.”