Our latest blog entry comes from Dan Stageman, Director of Research Operations for the Office for the Advancement of Research at John Jay College. 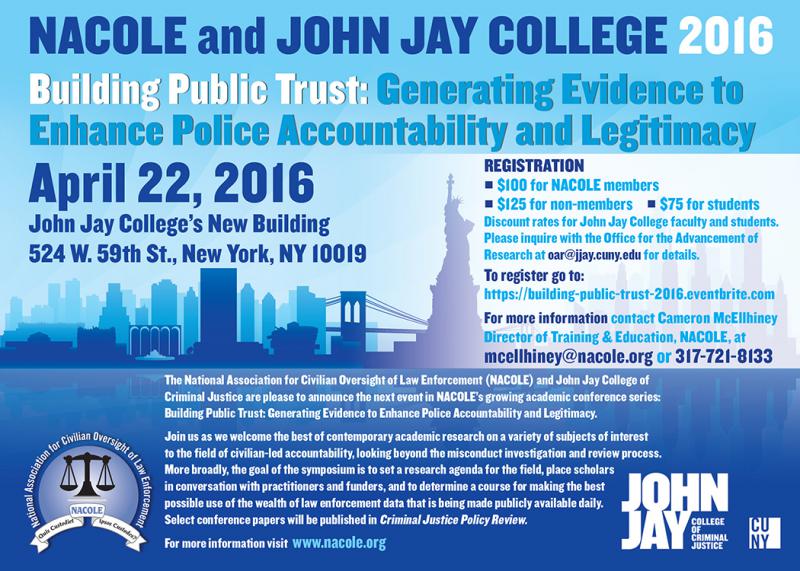 In February of 2015, the National Association for the Civilian Oversight of Law Enforcement (NACOLE) held its first academic symposium in partnership with Seattle University. The event – held in the wake of the police-civilian conflict that erupted following the Ferguson verdict, and coinciding a scheduled Black Lives Matter protest in downtown Seattle – was entitled Moving Beyond Discipline: The Role of Civilians in Police Accountability.

This Friday, April 22nd, John Jay College will host NACOLE’s second academic symposium, in the context of the ensuing year of national discourse on police-community relations. The title for this new symposium – Building Public Trust: Generating Evidence to Enhance Police Accountability and Legitimacy – speaks to the nature of how this conversation has evolved in the nearly 18 months since the Ferguson verdict. As the visceral anger and destructive unrest that accompanied those initial protests in Missouri has cooled, the Black Lives Matter movement has coalesced into a social, cultural, and political force to be reckoned with. An initially forceful counter-protest movement, which attempted to connect the ‘Ferguson Effect’ of ubiquitous public surveillance and perceived hostility toward law enforcement with an apparent rise in violent crime and homicide rates in cities across the country, has dwindled to a background murmur.

Perhaps most important for the criminal justice scholarly community, law enforcement policy-makers have begun to listen to the concerns raised by the Black Lives Matter movement and allied advocacy organizations  – and to respond in ways that push the conversation forward. Many of these responses have the potential to bring fundamental changes to the practice of law enforcement, the philosophy of policing, and – in the long term – the culture that makes many American law enforcement agencies so resistant to change.

The starting point for many of the constructive policy responses to the concerns raised by the Black Lives Matter movement is the Report of the President’s Task Force on 21st Century Policing, to which both NACOLE staff and John Jay College faculty made a number of important contributions. This week’s academic symposium takes as a particular focus the Report’s Action Item 1.3.1:

To embrace a culture of transparency, law enforcement agencies should make all department policies available for public review and regularly post on the department’s website information about stops, summonses, arrests, reported crime, and other law enforcement data aggregated by demographics. (13)

One year after the Report’s release, it is difficult to overstate the importance of this action item, or the impact that it has already had on departmental policies in major city law enforcement agencies across the country. Analyses like those produced by John Jay’s Misdemeanor Justice Project – on many years of misdemeanor arrests, summonses, and enforcement rates in NYC – would not have been possible without data shared by the NYPD. Commissioner William Bratton’s continued support for the project – even as he occasionally takes issue with its findings – perhaps speaks as much to a shift in open-data policy nationwide as it does to philosophical differences between Bratton and his predecessor, Raymond W. Kelly.

Civilian oversight in NYC took a giant step forward with Local Law 70 and the formation of the NYPD Office of the Inspector General in 2013. Appointed to the post in March of 2014, Philip K. Eure (who serves as committee co-chair for the NACOLE Symposium) has approached data-sharing and evidence-based assessment as one of the core functions of his office, pushing the NYPD on its use of litigation data in one of its first official reports.

This push for open data, in response to the concerns raised by recent protest movements and advocacy efforts, is an effort well-suited to the agencies tasked with formal civilian oversight of law enforcement; the question of what to do with this data once it is shared with the public is one that research scholars need to answer. In the hands of social scientists, open data can be transformed into a staggering number of genuinely useful tools: algorithms for predicting potential police misconduct, a relational database and typology for analyzing departmental trends in use of force, or a process-oriented framework for designing the roll-out of a major urban police department’s body-worn camera policy.

All of these tools will be featured, in presentations from the researchers who designed them, at Friday’s Symposium. The conversations that follow – led by leading oversight professionals, and including an audience of academics, policymakers, funders, law enforcement practitioners, and members of the public – should provide an open forum that pushes these researchers to refine their work and better respond to the needs of the communities whose advocacy helped make them possible.

Ultimately, however, these partnerships and the tools to which they give rise are only one link in a chain that should end with the general public. True transparency is about communicating the workings of formerly opaque institutions to the public those institutions are ostensibly intended to serve. Transparency in law enforcement should strive to correct the informational imbalance between the police and highly-policed communities – an imbalance that allows an arresting officer to pull up the intimate details of a suspect’s life on a computer screen with the touch of a button, but prevents community members from knowing the realities of, and the rationales for, the manner in which they are policed.

Both scholars and oversight agencies are often ill-suited to make the final connections that communicate their vital work to the publics – particularly highly-policed communities – they mean to benefit. The vital role for journalists in disseminating the evidence-base that these researchers are working to build cannot be overstated. Resources like The Crime Report’s media toolkits and Guggenheim Fellowships, that support evidence-based criminal justice journalism, make it possible for journalists to better communicate the meaning of publicly available data to a public that might not have the expertise to digest this data directly.

← Why the Trump presidential transition has just begun Who Are You (aka the Case of the Unknown Directors)? →